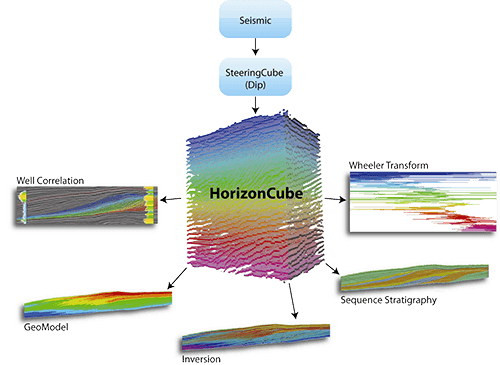 In the HorizonCube we typically create hundreds of chrono-stratigraphic horizons per sequence. Each sequence is bounded by mapped top and bottom horizons. Chrono-stratigraphic horizonsare either modeled (stratal slicing (also known as proportional slicing), parallel to upper – and parallel to lower horizon), or auto-tracked. The second generation 3D auto-tracker algorithm implemented in the HorizonCube tracks the dip/azimuth field to generate horizons that are typically separated by one sample at the starting position.

Optionally the user can smooth the dip-field and thus reduce the impact of random noise. An advantage of dip-steered auto-tracking is that dip fields are more continuous than amplitude fields. This is as opposed to conventional autotrackers that pick amplitudes and which lead to a set of patchy horizons rather than a set of continuous, chronologically consistent horizons.

To create a HorizonCube the user has to supply:

Bounding horizons are either imported, or mapped in OpendTect. Here the user has two options: to use OpendTect’s conventional amplitude & similarity auto-tracker, or to use the new dip-steered auto-tracking algorithm incorporated in the HorizonCube. The advantages of the latter are speed and watertight intersections at fault planes.

Also conventionally mapped / imported horizons can be made watertight at intersections with a new horizon trimming tool that comes with the HorizonCube plugin.